“Returning to America from his college in London in order to fight in the American Revolution, Jonathan Barrett leaves behind his unearthly girlfriend Nora, a vampire, and takes with him an insatiable thirst for blood.” (from Amazon.com)

Death and the Maiden

“New in the stunning colonial vampire saga. As the Revolutionary War wages outside, the vampire Jonathan Barrett faces an even greater danger within his family’s mansion–in the form of a seductive, scheming woman. To protect his loved ones, Jonathan must give in to his unholy hungers . . . and kill again. Original.” (summary from Amazon.com)

“Fleeing to England with his sister to avoid the American colonial rebellion, vampire Jonathan Barrett desperately seeks Nora Jones, the mysterious woman who is responsible for transforming Jonathan into one of the living dead.” (summary from Amazon.com)

“The thrilling vampire history of Death Masque continues as Jonathan Barrett meets an engaging little boy, his son, the child of an almost-forgotten night’s dalliance. Jonathan intends to do right by the lad, but his enemies intend to use his affection for the boy against him. The only one who can help Jonathan is his long-lost immortal love. Original.” (summary from Amazon.com) 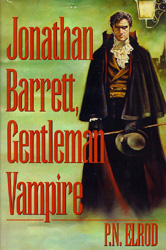