Congratulations on the publication of your first novel, The Awakening, which is the first book in the series Les Trois Souris Aveugles.

Q – The book begins with a unique premise that blends the military with centuries old European mythology and a modern natural disaster. Did this opening come to you right away or did it follow after the characters were developed?

A – That certainly is a thought provoking question. It certainly did not come right away. It was probably a combination of my educational background in World history and philosophy, my love of the old scary movies when I was a kid, having seen the results of natural disasters over the decades and how they can affect lives and civilizations and a very active, yet deductive imagination as to how to put it all together. The evolution of the vampires came first from the valley outside of Sighisoara, Romania. Sighisoara was the birth place of Vlad the impaler from the house of Dracul. It seemed fitting that the vampires should come from this region. The beginning of their evolution started with the bubonic plague in Europe in the 14th century. Their actual birth was after World War I and before World War II. I used the concept of vampires as the perfect universal soldier. A soldier that could be trained to follow a regime such as the Nazis. When you think about it a genetically superior being with enhanced sight, smell, hearing, strength and the ability to feed off of the living and dying soldiers on the battlefield in a time of war when rations were in short supply makes perfect sense to be the ultimate combat soldier. My thoughts were, “I’ll bet Hitler might agree with me on this one,” so, the concept of vampires as a military soldier became part of the story line.

Q – Where did the inspiration for your main trio of characters, Andrea, Sonya and Nicholas, come from?

A – To some extent from my travels in Europe. These were popular names in Germany and Austria and I remembered the actions, sense of humor and personality traits of the beautiful young people I met with these names while on holiday. I am a big fan of dark humor and an even bigger fan of dark morality so I used these names in conjunction with the story line based on the personalities of real people.

Q – You first visited New Orleans in 1967 and have returned many times. Did you write much of the novel in New Orleans or from memory?

A – I wrote most of this from memory. I find when you really enjoy an area you tend to remember it well. When I was a rocker and a musician we would play music in places like the dives, juke joints and watering holes in the French Quarter. It was a great combination of the European walking districts, quaint shops and cafes and hedonistic night life that I have always enjoyed, so I tend to go back often to refresh that memory. 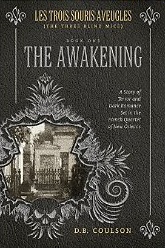 Q – How has your background in song writing and music affected your writing?

A – Basically flow of story line, balance, I would guess. I am a Libra, so maybe that is just how I think. I tend to be a symmetry freak on most things. Music must be almost perfect or certainly well timed to be enjoyable, in my opinion, so I carry that into novel writing as well. I never was very good at extemporaneous jazz. It’s funny to be such a freak on form and function and to be writing about the very real lives of hybrid vampires at the same time. Sometimes I think I just had too much fun in the sixties and the seventies.

Q – What is your favourite vampire novel or film?

A – Actually I have two that stand out as favorites. The first is the classic old Dracula film in 1931 with Bela Lugosi. I will never forget that face and how they worked with light in that old black and white version. The second was a 1973 television version of Dracula that many people have probably never seen with Jack Palance as Count Dracula. Palance was fantastic is his defiance against those who would destroy him and very monster like in many scenes. I also enjoyed Christopher Lee in his portrayal of Count Dracula in older versions of the vampire stories.

Q – Are you currently working on the second book in the series?

A – Actually book two, three and four are completed. Book five is partially completed and verges on a new direction for our three travelers that has international implications concerning war, cloning, genetics and that age old question concerning dark or not so dark morality, depending on your viewpoint.

Thank you for taking the time to answer these questions for us today, we wish you all the best with your future work.

View the series listing page on the Vampire Library website for full details.